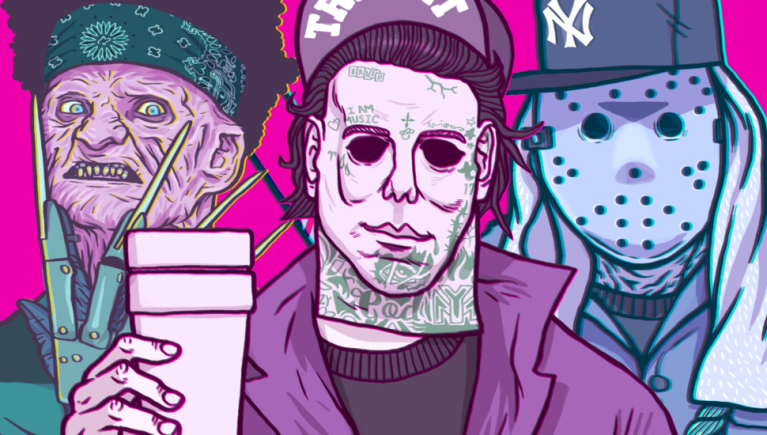 Nothing screams Fall quite like walking through the neighborhood and admiring the bright orange pumpkins perched up on stoops or cuddling up under the covers and watching scary movies. While Halloweentown and The Addams Family are a bit more my speed, I understand the appeal of jump scares and unmerciful villains. If I didn’t live by myself, I’d be more inclined to watch them. Unfortunately, just the sound of my creaky walls scare the shit out of me, and I have already put my parents through way too many 3 am phone calls over dumb shit. Don’t get me wrong, I love the thrill. But I save that for the nights where I can cuddle up with my girlfriends and have others to sacrifice just in case Freddy Krueger tries to invade my dreams. Sorry guys. I do wish I was more courageous, though, because there’s more of an overlap with spooky, horror-filled Halloween themes and Hip-Hop than one would expect. In fact, there’s a whole sub-genre dedicated to it known as Horrorcore. While it’s a bit too graphic for my taste, the imagery is pretty fascinating. Hip-Hop is known for its story-telling, and lyricists have created some of the most vivid, terrifying tales of gory serial killers and Satanic rituals. So to get you in the Halloween spirit, I’ve compiled some of my favorite Hip-Hop tracks that encapsulate the festivities and nightmares alike that make the holiday so enchanting. And don’t get it twisted, just because a bloody monstrosity isn’t jumping out at you with a chainsaw doesn’t mean these songs are any less scary; if anything, they give room for your imagination to run wild and create your own scenario of your biggest fears.

END_OF_DOCUMENT_TOKEN_TO_BE_REPLACED
Widgets
Follow Spice on the Beat on WordPress.com