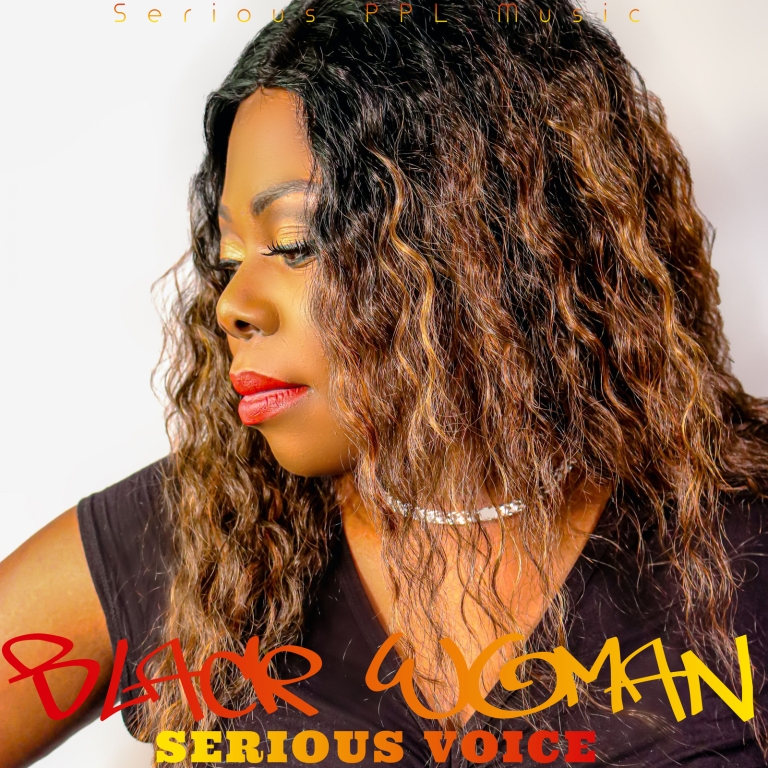 Do I have something special for you. The lovely Serious Voice has a brand new track, and we get to premier it right here at Spice On The Beat. My lovely readers get a first listen to this incredibly powerful track as it doesn’t premier until tomorrow, where the amazing MC will be unleashing her song on Sway In The Morning. I also got a chance to interview Serious on her brand new track, “Black Woman”, as well as a bit of her outlook as a WOC in the industry.

Serious Voice is from Brooklyn, adopting that New York attitude of being apologetically herself. That translated into her music in which she used experiences with abuse, injustice, and rejection in her lyrics, refusing to be beat down by her hardships. Her debut album, Shofar, kick-started her artistic journey, as it led her to being featured on Spike Lee’s Netflix TV show, She’s Gotta Have It. She’s also been seen on Sway In The Morning, Hot New Hip-Hop, and Essence Magazine.

I got the chance to hear her new song, “Black Woman”, before I wrote this article. The song, which is just one of the tracks off of Serious Voice’s upcoming EP, Beautiful, contributes to the overarching theme of supporting black women. The song begins with a beautiful melodic lo-fi synth, while Serious asks the question, “you’re going to ask me what I’m doing here?” That very question is the bane of my existence. I think I’ve lost track of how many times I’ve been asked that, whether at a hip-hop summit, or in a recording studio. To be confronted in that manner, with my position and knowledge seemingly irrelevant in comparison to all of the men is such a demeaning experience.

As the beat progresses, the tempo picks up, building up the tone of the song as well as if pent up frustration is just awaiting its release. She looks back at the questions that she’s been asked, the things she’s been accused of, and the things that have been expected of her, while reminiscing on her development without her parents. She describes a time in which women were dependent, thought of as weaker because of society’s expectations for them. However, all of this proves to be irrelevant as she showcases her strength, showing that none of these things make her, and none of these have broken her. She name drops some of hip-hop’s biggest names like “Tupac, Biggie, Nas, Jay-Z”, demonstrating to the listener that her flow is able to compare. She further showcases her hip-hop knowledge by quoting lyrics of songs that every fan has grown up with, contrasting it with this idea that she’s “just a black woman”.

The lo-fi sound especially picks up with the tribal beats as she accuses the listener that she “[bets] you think [she’s] just another black woman”, diving into what makes every black woman special. She uses this second verse to develop the idea of black women, showing their undermined strength and growth, versus the first verse which touches on themes of welfare and families. She also uses this verse to namedrop examples of strong black women instead, such as Michelle Obama and Serena Williams. The particular line, “I’m more than just a black woman, in need of a black man; oh yeah, I’m a rap queen, more than just a big butt and shiny white teeth” was my absolute favorite part of the song. That line was so incredibly fierce, and the production of the song was so adamant at highlighting the idea that you will listen to whatever the fuck this woman is saying to you. Additionally, I was able to translate those lyrics into my own experiences as an Indian woman, and the idea that I’m so much more than just a housewife or a young girl awaiting her time to get married. The production of the song is so intense and heavy, and I can’t help but want to bow down to this incredible woman.

You can check out the exclusive release here:

How did you get your name?

Serious Voice: “I got my name from my family. For 12 years I didn’t have any siblings in America and was always bored. I’d mope around with a serious face and was just serious about everything I did. Everyone started calling me Serious. Later in my early 20’s I added the voice to distinguish
myself from the other Serious’ out there in music.”

When did you start your music journey? What got you into it?

Serious Voice: “I started rapping at 12 years old. My home life was very destructive and abusive. I was witnessing way too much and needed a way out to vent, so I naturally gravitated to music.”

How have you personally seen hip-hop evolve through the years of being involved in it?

Serious Voice: “This is a great question. When I started in the 90’s lots of people did it as a hobby, or a way to impress their family and friends. That meant the quality was very low for independent artists, since no one emphasized mixing and mastering as much. Then the 2000’s came and more females like myself were one out of maybe 20 rappers getting attention for their lyrics and music in general. Whenever I’d do a show, I’d be the only female and people always asked why I was rapping. Today, the ratio has clearly changed. We have so many females rapping, that we can pick and choose which ones we like. I hope people will rock with
my vibe because I don’t rap about the usual sex, cars and clothes.. I try to make an impact and motivate people to be better with my artistry.”

Are there any artists that you would say you’ve been extremely inspired by?

Serious Voice: “Hands down, Queen Latifah. I probably listen to “U.N.I.T.Y.” about 3 times a week. It just gets me revved up. Then I will vibe to Rapsody. She is just so positive and confident and I think we both try to empower women and people in general.”

If you could have anyone featured on your next song, who would it be?

Serious Voice: “I’m not too crazy about features. I’ve seen it go wrong in so many instances. For me, I’d say Rapsody because I know we would collectively make a bold statement and women across the board would love it.”

Would you say it was one particular incident that led to your new song, “Black Woman”, or years of different experiences?

Serious Voice: “Yes, as a Black woman I’ve experienced a number of things that has caused me pain, however there was one incident in an elevator with a Caucasian man who didn’t think I belonged in that
particular building / working for that particular company. He looked at me and asked “What do you do here?” in a tone that said I must be doing something low level because I couldn’t be doing something impactful. I didn’t respond then, but I am on May 22nd with ‘Black Woman’.”

How would you say Black women are viewed in the music industry?

Serious Voice: “There is a tremendous amount of colorism that happens in the music industry: You will find lighter skinned Black women getting placed in top-tier mags, TV shows, etc. while someone that is darker skinned does not. They can only get placements in smaller, less visible outlets. However I think since Cardi B. came to the forefront I’ve seen more
and more (dark skinned) females get the attention they deserve.”

In terms of the music industry as a whole, why do you think people struggle with having more than one woman on top?

Serious Voice: “I think there is struggle because this was originally a male-dominated genre. When women began to break in they were very confident, lyrically on point and many felt threatened. Even today you will find one female collaborating with everyone. There’s never a moment where you’ll see Cardi on a track and it’s a #1 on Billboard, while Nicki is featured on a Missy Elliott track and it’s on Billboard. That just isn’t happening. People want to work with whosoever that flavor of the month is verses someone who has been grinding for years and produces solid music.”

Do you think that hip-hop is starting to welcome women a bit more?

Serious Voice: “Yes, it is very welcoming right now, we are seeing more than one woman and that’s a great thing. We can pick and choose who to support. I would, however, like to see more labels singing women and more funding for tours and that sort of thing.”

How would you say this new school of rappers compares to old school?

Serious Voice: “New school rappers are more prone to create music that are more harmony driven and not lyrically driven. Old school is know for being “real rap” because people like Yo Yo, MC Lyte and Queen Latifah had bars and never slacked in that area. They would drop a few bars and you’d want to repeat the record because it just sounded so real and resonated with you.”

What do you have planned with your music in the next coming year, especially with the quarantine affecting how artists promote their music?

Serious Voice: “Honestly, the Coronavirus has humbled me and so many of my friends. We all had tours scheduled, paying gigs, video shoots, award shows we planned to attend and just about everything has gotten cancelled or postponed. I have turned my lemons in lemonade by doing weekly mini-concerts on Instagram and sometimes Twitch. It has kept me sharp as an artist. When you’re out touring you can hide behind the mic, behind the stage, your hype man/woman etc, but when it’s just you on Instagram in front of the world that is the moment you either have “it” as an artist or need to go back to the drawing board. I plan to continue these social media
concerts until the country is fully re-opened and I can go back to my regularly scheduled program.”

And what do you have going on that you would like people to check out? Where can people find you?

Serious Voice: “Be sure to check out my weekly lunchtime concerts on Instagram. I am usually on there from 12:30p EST to about 12:50p and I do all of my top tracks. Going forward, I plan to perform “Black Woman” and other new songs regularly. I also respond to fans publicly and via DM. I can be found on Instagram @seriousvoiceny and on Twitter at @serious_voiceny. Make sure you follow me on Spotify too!

If you’d like to check out some of Serious Voice’s other work, you can find it on her different platforms below: