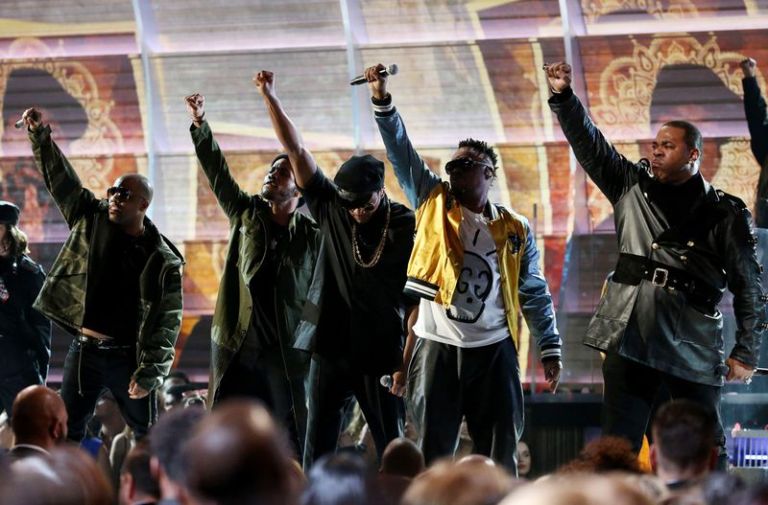 In Politics, Society, and Hip-Hop.

“Me and all my peoples, we always thought he was straight. Influential mother fucker when it came to the business. But now, since we know how he really feel, here’s how we feel.”

I struggled with deciding if I should make this post simply because I was worried that I would offend someone or that people wouldn’t want to read something politically fueled. But with the election picking up, I decided to say fuck it. I want this blog to be personal, vulnerable, and 100% me, and to edit out this part of my life would mean that I wasn’t being genuine. Everything that I post is opinion-based and from my perspective, so even if you do have a different perspective (and even if I do get aggressively passionate about this), I’m not saying that this is the right answer or the only way things should be. However, I do draw a line at hate, racism, misogyny, and inequality. Additionally, because I do feel that over the past few years artists have stepped up to the plate and been a sense of comfort as we have witnessed our country regress, I would like to do the same. During these times of darkness when I felt pessimistic, hip-hop, in particular, has been a safety blanket by reminding me that I’m not alone.

Whenever I think of politics in hip-hop, the first song that comes to mind is YG’s “FDT” (Fuck Donald Trump), with the first version featuring Nipsey Hussle (RIP, TMC), and the second version featuring G Eazy. Like Nipsey said, “Am I trippin’ let me know, I thought all that Donald Trump bullshit was a joke”. Honestly, same. This song became the anthem for protests and rallies, and although the song was taken extremely lightly because of its trap beat and humorous chorus, everything mentioned was spot on. The most amazing part of the song is towards the end of version 1, when Nipsey responds to YG’s request to “tell the world how [he fucks] with Mexicans” by saying that it “wouldn’t be the USA without Mexicans, and if it’s time to team up then let’s begin”. As you can probably guess, this song was not well received by the media. Unfortunately, it fueled the generalization that hip-hop is full of violence when in reality, it gave black people a voice against a man who tried to turn the country against them. The song even called for unity between two extremely important marginalized groups who have a history of racial tension. Even if the flow of the song isn’t the best, that’s a pretty dope thing to accomplish.

I don’t really want to touch on version 2 quite as much but Macklemore stating “What if we ban all the white dudes because a couple have run up in trench coats and rifles and killed in the name of Jesus Christ at the high schools” hit the nail on the head. He knew that as a straight white man he wasn’t being affected by these policies, and rather than trying to make things about him, he evaluated the real issues that are being deflected. That right there is how to be an ally.

The craziest thing to me is the fact that these songs were made in 2016 and yet they still stand true. When minorities were scared because of their sexual orientation, gender, or race, they were told that they were being dramatic. That these things were said to get a reaction, and that nothing would actually happen. Fast forward to 2019 and all of the lyrics still apply.

A different tone would be one of my personal favorites, A Tribe Called Quest’s album, We Got It From Here…Thank You 4 Your Service. This album was already monumental as it marked Tribe’s first album in 18 years and last album before Phife’s passing (RIP). I remember getting up for classes after staying up until 3 am watching the electoral votes being counted. I changed my address to Pennsylvania so that I could vote in a swing state. It also ended up being the last state to be counted before I knew the unfortunate direction that this election was taking. I called my mom up to see how she was doing, knowing that neither one of us wanted to get out of bed that day. The cloudy skies and police on campus didn’t help, but I remembered that Tribe was releasing their new album so that was playing in my headphones as I walked towards Polett Walk with my hood up and my head down.

My favorite song off of the album is “We The People”. The harsh guitar sounds revolutionary and aggressive, making you feel as though this song really is something for us people of the United States to stand behind. And it feels liberating. The sing-song chorus sounds hypnotic, and yet the lyrics sound like it’s some sort of propaganda, with Q-Tip singing to the people that “All you black folk you must go. And all you Mexicans you must go. All you poor folks you must go. Muslims and gays, boy we hate your ways.” That bit right there is so haunting because it’s so robotic and yet so accurate. With systems in place for discriminating against these groups, we really are moving in the direction of separating out people that are “different” and labeling them for what they are. And unfortunately, history repeats itself. Although the album received a lot of mixed reviews, I think it’s incredible that Tribe was able to release an album after 18 years that had a lot of their iconic sounds while staying politically relevant. Often times you can hear them allude to the president as a woman throughout the album, so I think they thought Hillary was going to win but chose not to change the lyrics upon election day. Although I wish the results were different, I’m glad they didn’t change the album because it offered a sense of solidarity, like we weren’t alone in feeling what we were feeling.

One of my other favorite anti-Trump songs is Anderson .Paak’s “6 Summers”. The title signifies the amount of time Trump would be in the White House if he is re-elected. Paak creates an image of what Trump’s love-child would look like after his scandal in 2018 (which one at this point, right?) in which his former door-man spoke out about having information on Trump’s affair with a housekeeper. The girl he describes would be doing just about everything Trump would hate, such as “[drinking] mezcal” and “[kissing] senoritas and black gals”. She sounds like she would be a lot more badass than Ivanka. He also speaks up against gun violence, ending the song with “Pop-pop-pop goes the shooter, reform reform shoulda came sooner”, touching on the increasing violence throughout the United States. This song offers a quirky and fun take on the situation, but as you dive deeper into the lyrics, it’s definitely much darker.

Other rappers such as Eminem, Rick Ross, (who both go as far as to mention assassinating Trump) and The Game have all spoken up against Trump in their music. However, hip-hop didn’t always have this view of him. In fact, Trump’s name was almost like a gold standard. He was the level of rich that artists wanted to reach. Hell, Mac Miller had a song called “Donald Trump” where he sings about essentially wanting to be that successful and rich, just for Trump to attack him over Twitter because he didn’t clear his name and was making money off of it (keep in mind, this wasn’t nearly as much money as this asshole already had). Unfortunately, because Trump was shouted out in over 300 rap verses dating back all the way to the 1980s, he used it almost like a token black-card. He couldn’t possibly be racist because all of these rappers wanted to be like him, right? In fact, over 60 tweets were about hip-hop artists using his name, although nearly 50 of them were about poor Mac Miller. Artists like Jeezy, Jay-Z, Kendrick Lamar, and Raekwon have all rapped about being a variation of Donald Trump in their own way. And yet, Kanye West is the only person to have rapped positively about him in 2010 when he compares his baller status to Trump’s by saying, “I’m so appalled, Spalding ball, balding Donald Trump taking dollars from y’all”, just to hold the same sentiment despite Trump numerously talking shit about black people, hip-hop artists, hip-hop culture, and just about everything else that you would hope your favorite artist would advocate for.

As we get closer and closer to the election, I hope that it will inspire artists to use their art as a platform. I also just really love hearing musicians create songs talking shit about this guy. I will hopefully be able to update this post and playlist that is embedded below with more songs as we get closer to 2020, but until now please enjoy some of the songs mentioned while you read through this.

Questions and comments can be posted below, and make sure to follow my blog to see new posts! Make sure to click the drop down menu on the top right to see more posts that give you some insight as to who I am and how I got so interested in hip-hop.