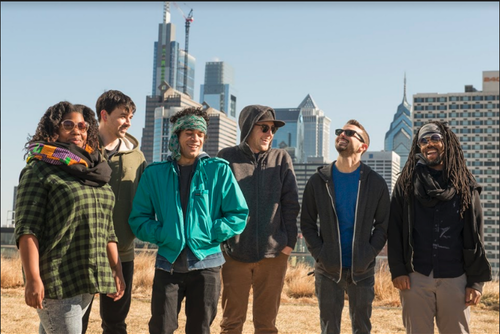 I knew when I created this blog that I wanted to showcase Philadelphia artists. Andrew Nittoli, of the Philadelphia group Ill Doots, was the first artist to not only understand my vision but to want to contribute to it as well. And I could not have had a more incredible group to begin my series of Philadelphia’s Phinest with, a series of posts dedicated to some of my favorite artists that I’ve met through this beautiful musical journey.

I walked up the stairs of Milkboy one Sunday night to experience an Ill Doots show, knowing that they had to have been amazing because of the mutual friends that I met Andrew through. And boy, they did not disappoint.

Their group, whose name is an acronym for “I Love Living/I Love Learning”, includes an emcee, vocalist, keyboard player, bassist, and drummer to create a sound that resides in hip-hop but spans multiple genres such as funk, jazz, rock, and soul. And while their talent individually as artists is absolutely beautiful, what I loved most was their chemistry as a group. Both the emcee Anthony and the vocalist Elle had the most amazing stage presence, causing a permanent smile on your face. Even during moments of re-grouping to choose their next song or hyping one another up while they showcased their individual skills, it was extremely prominent that they shared a lovely mission to create music that moved and inspired their audience. To capture the love and respect that each member shared for one another, not only as bandmates but as musicians, I asked each person to pick one other artist in the group and to write a little bit about them. Here’s what they had to say:

Their music, which definitely does not shy away from being politically fueled, (we all know how much I love artists with strong voices), touches on issues we face today such as the overwhelming influence of technology and inequalities among different communities to make a statement without sounding preachy or too serious. Instead, the band has you tapping your foot and moving your body along to raps about the lack of free lunches and police brutality. For god’s sake, they literally have songs called “Sheep” and “Pants”! I really had no idea what I was getting myself into when I heard those two songs begin, and yet they are two of the most lyrically clever songs ever. The way the tone darkens as the songs progress and the lyrics intensify always keeps you hooked and amazed by what they’re going to say next. And goodness, Elle’s vocals just make everything ten times more emotional with her beautiful range. But with that being said, every single one of the members has such an amazing personality that shines through incredibly on stage without overshadowing any of the others. Anthony is energetic and passionate, Elle is graceful yet unapologetic (very Jazmine Sullivan), Andrew is focused and immersed, Scott is the funkiest white boy I have ever seen (just wait until he starts spitting bars), and Jordan is grooving the fuck out as he sets the pace. Everything about them made me smile.

I also love that each song genuinely showcases each musician’s individual talent. You can feel their energy through their riffs, basslines, melodies, and solos and understand that they really love making music and love the music that they’re making. It’s so exciting and refreshing to find people who actually care about the music that they are making, especially in a band and especially when the music has such a strong message. You can tell that their lyrics actually come from a place of concern and care, rather than just being controversial for the hell of it. To be able to see the thought put into each song is a beautiful thing for us as listeners to be able to experience. And even more incredible is the fact that the activism doesn’t just stop at the music; you can find the band posting to their Instagram on election day urging listeners to go out and vote and performing at coffee shops while District Attorney Larry Krasner speaks to the community about issues we are facing.

The group has a self-titled album out as well as a hypnotic new single, “Our Own” which can be streamed on most platforms. As always, I will have a playlist embedded below. I would strongly suggest checking out their album. Every song has its own sound as well as its own message and you’re bound to find at the least that one song that really resonates with you. For me, my favorites are “Smile” and “Suddenly”. “Smile” has the softest intro but quickly picks up in tempo as Anthony progresses with his rapping, leading into the most feel-good chorus. And goodness, the vocals are just amazing! Every piece of the song seems to sound so different and yet it just works so perfectly together. It instantly makes me think of The Roots’ “Sacrifice” in terms of tone and melody, but also with the effect that it has personally on me. No wonder they were asked to play at The Roots’ twentieth anniversary for Things Fall Apart at World Cafe Live. My other favorite song of theirs, “Suddenly”, has such beautiful lyrics that I can’t help but absorb them. They’re empowering with such strong imagery. The initial rapping has such an Andre 3000 flow that I love, and the song just gets funkier by the second. It really hits me as you hear each of them sing, “I got the-I got the-I got the power”, giving me a sense of strength just by association.

If you like the music, and even if it wasn’t your cup of tea, come out to see them at La Colombe in Fishtown on November 22nd at 6:30. It’s free to get in and they will be performing along with Chill Moody. Join me for a cup of coffee and enjoy the show because while the recorded tracks are incredible, they don’t compare to the show this group puts on. If you aren’t located in Philly, I’ll make sure to include the group’s website below to see if they’re coming to a city near you. This is definitely a group whose voice can’t be silenced and I’m so excited to see what else they come up with.